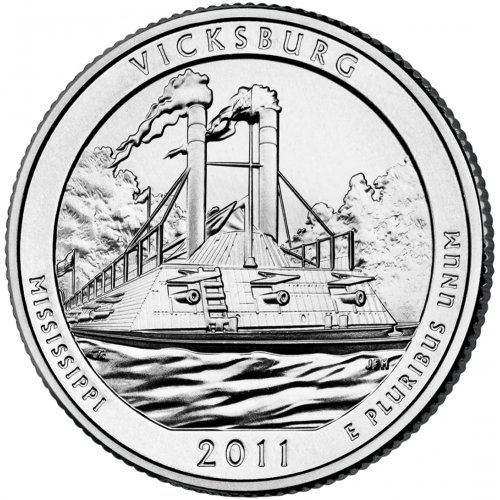 The 2011 Vicksburg National Military Park Quarter will be the US Mint's ninth release as part of its America the Beautiful Quarters Program® and honors the military park found in the state of Mississippi. When released on August 29, 2011, it will also be the fourth of five coins to appear as part of the series that year.

Vicksburg National Military Park of Mississippi was created to commemorate the campaign, siege and battle of Vicksburg during the American Civil War. Seen as a vital military stronghold on the Mississippi River, its possession by the Confederate States of America was to be tested by Union forces of the United States.

To that end, operations were begun by Union forces on December 26, 1862 in preparation to attempt to capture Vicksburg. Many maneuvers were accomplished before the actual siege of Vicksburg began on May 18, 1863. Following 47 days of no supplies and constant bombardment, Confederate forces surrendered Vicksburg on July 4, 1863.

Obverse:
John Flanagan's portrait of George Washington (modified by William Cousins) is featured on the obverse. Also seen are the inscriptions "UNITED STATES OF AMERICA," "QUARTER DOLLAR," "LIBERTY", "IN GOD WE TRUST" and the mintmark.

Reverse:
Shown on the reverse of the Vicksburg Quarter is an image of the Civil War ere gunboat USS Cairo as it would have looked steaming on the Yazoo River during the war. The Cairo was salvaged and is now on display at Vicksburg. Also shown on the reverse are the inscriptions of "VICKSBURG," "MISSISSIPPI," "2011" and "E PLURIBUS UNUM." The reverse was designed by AIP Master Designer Thomas Cleveland and sculpted by United States Mint Sculptor-Engraver Joseph Menna.

2011-P United States 25-Cent Vicksburg/Mississippi National Park Quarter Coin comes from an original roll and in brilliant uncirculated condition.
The photo of this item is a stock image only. 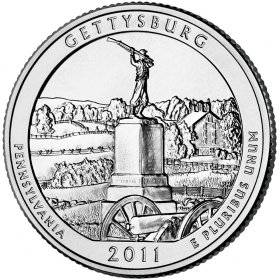 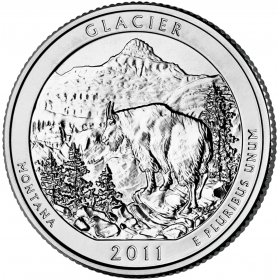 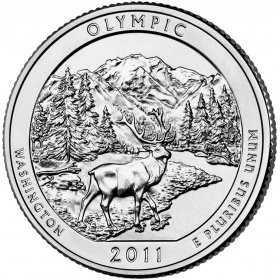 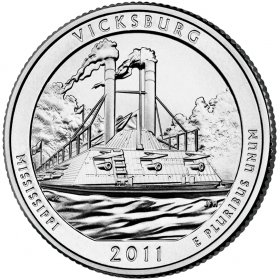 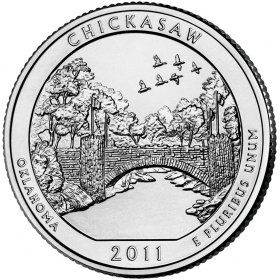