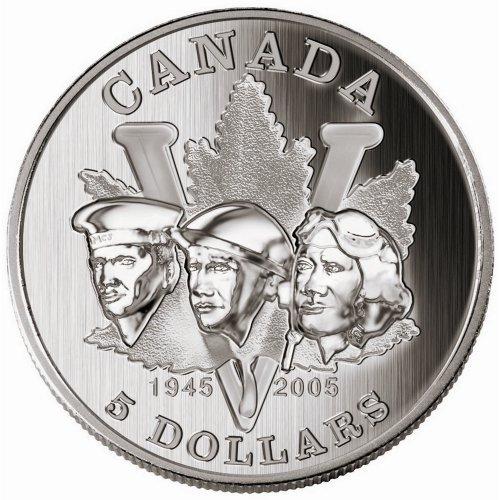 When the Second World War began with Hitler's invasion of Poland on September 1, 1939, Canada was hardly prepared to take up arms. Its regular army had only 4,500 men supported by 51,100 partly trained reservists. Less than 20 modern aircraft and only six warships were at the ready. Still, despite seemingly modest resources, this nation of 11 million people rose to the challenge in support of Britain and France.

Canada declared war on Germany on September 10, 1939, and by month's end, over 58,000 Canadians had enlisted to assume military roles on the ground, air and sea. Canada's contributions were diverse, and every role was carried out with conviction and honour. In total, more than one million Canadians joined the fight for freedom, but the cost was high: over 45,000 dead with thousands more wounded.

On May 8, 1945, they celebrated Germany's surrender and eagerly waited to return home. By early 1946, most were back in Canada to discover that their great sacrifice had forged a new world. Not only did it win freedom, it shaped the identity of a nation and earned Canada newfound respect around the world.

Designed by Canadian artist Peter Mossman, this $5 fine silver coin pays tribute to the Canadian forces with portraits of military personnel from the navy, army and air force, set against a maple leaf and the victorious letter "V" that was inspired by Winston Churchill. The obverse features a portrait of Her Majesty Queen Elizabeth II by Susanna Blunt.

Maroon display case with an insert which houses the coin. Protected by a black beauty box.