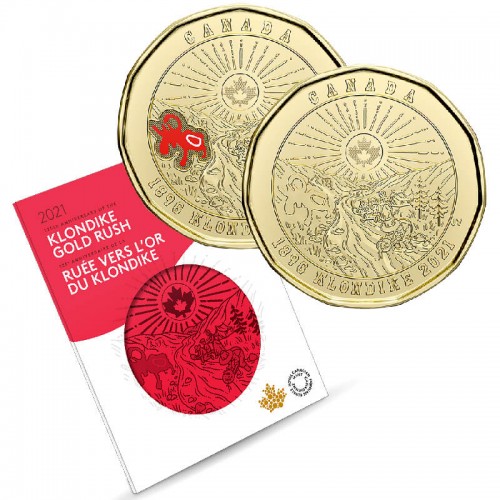 Step back in time with a $1 coin that commemorates the 125th anniversary of the Klondike Gold Rush. On August 16, 1896, four people made a gold discovery that captured the world’s attention. Their find triggered the Klondike Gold Rush and brought an influx of gold rushers, forever changing the land, its people and their traditional ways of living, in a manner that continues to be felt today.  The moment is captured on the $1 coin that is twice featured here—as a struck version, and as a selectively coloured one.

Add a Klondike Keepsake Card to your collection.

REVISIT THE KLONDIKE! This year (2021) marks the 125th anniversary of the Klondike Gold Rush. The Klondike experience is explored on several coins issued in 2021, including the $1 circulation coin that is twice featured in this set.
TWO KLONDIKE-THEMED DOLLARS! This seven-piece set includes two versions of the 2021 $1 125th Anniversary of the Klondike Gold Rush commemorative coin: a struck (engraved only) edition and a selectively coloured one.
SEVEN COINS IN ONE SET! Five denominations of Canadian coins are represented in this set, which includes two versions of the Klondike-themed $1 coin, plus FIVE classic circulation pieces: $2, $1, 25-cent, 10-cent and 5-cent coins (one of each). A total of seven coins!
A 2021 KEEPSAKE! Your coins come packaged together in a fact-filled, display-ready collector card. These uncirculated 2021 circulation coins make a great souvenir or keepsake and represent the year in coins. (Also available as a subscription.)

Designed by Canadian artist Jori van der Linde, the $1 coin’s reverse features the artist’s rendition of the gold discovery that set off the Klondike Gold Rush. Under the shining sun, Keish (“Skookum” Jim Mason), Shaaw Tlàa (Kate Carmack), Kàa Goox (Dawson Charlie), all of whom were of Lingít and Tagish descent, and George Carmack can be seen panning for gold at the edge of Gàh Dek (Rabbit Creek/Bonanza Creek). A powerful symbol of cultural revitalization, the pictorial symbol for Ëdhä Dädhëchą (Moosehide Slide) is highlighted in red and white on selectively coloured coins; it appears on the opposite side of the creek, and represents the Tr’ondëk Hwëch’in and their deep, abiding connection to the land.

The obverse features the effigy of Her Majesty Queen Elizabeth II by Susanna Blunt.

Did you know?
Chief Isaac was the leader of the Tr’ondëk Hwëch’in during the Klondike Gold Rush and in the years that followed. During the early years following the Klondike Gold Rush, Chief Isaac understood that the changes brought by newcomers would have a great impact on his people’s lives and culture. In an act of foresight, he “cached” many of the community’s traditional songs and dances, sharing them with Alaskan neighbours.
An iconic drum, seen held by Chief Isaac in historical photos, featured a moose-shaped symbol of Ëdhä Dädhëchą (Moosehide Slide), which has been re-created on this piece and the commemorative $1 circulation coin. It is an important icon of perseverance and cultural revitalization, one that represents the inherent belonging of the Tr’ondëk Hwëch’in to the land.