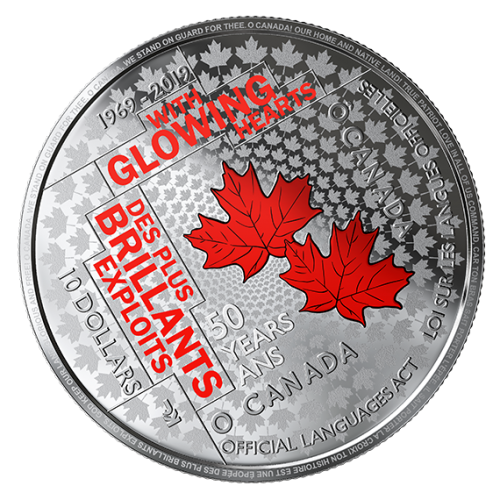 They're the lyrics you hear on Canada Day, at a citizenship ceremony, or before the first puck drop at a hockey game. Sung in our two official languages, English and French, "O Canada" is an invitation for every Canadian to add their voice to a musical expression of pride! This anthem-themed collectible commemorates the 50th anniversary of the first Official Languages Act, which gave equal status to English and French in Canada—two languages that represent more than 300 years of shared history.

Its design features two maple leaves—one for each official language and both clad in red—against laser-engraved leaves that pull you into the celebration and represent a surge of pride. But the beauty of this piece lies in the little details, almost invisible to the eye! Take a closer look at the text along the design's rim: you'll find the bilingual lyrics of "O Canada", presented in the two languages that play a big part in defining who we are.

We're marking the 50th anniversary of the Official Languages Act with a bilingual celebration of "O Canada!" Order today!

"O CANADA!" Our first coin with text so small, it's almost not visible. Closer inspection of the rim reveals the lyrics of "O Canada" in both official languages—English and French.
MIX OF TRADITIONAL AND LASER ENGRAVING! A circular pattern of laser-engraved maple leaves adds a sense of movement to the design from behind the larger, traditionally engraved elements.
A BILINGUAL CELEBRATION! A powerful commemorative piece that marks the 50th anniversary of the Official Languages Act (1969), through the English and French lyrics of "O Canada".
SYMBOLIC COLOUR! The engraved design includes two maple leaves—one for each official language and both tinted in one of Canada's official colours.
TAKING PRIDE IN DIVERSITY! This collectible is an affordable addition to any collection and a show of pride for Canada's linguistic duality. Our two official languages are rooted in our history, and to this day they continue to shape our identity.
NO GST/HST!

Designed by Joel Kimmel, the selectively coloured reverse is double dated (1969 - 2019) to commemorate the 50th anniversary of the Official Languages Act. Two red maple leaves represent Canada's two official languages, English and French. Throughout the field, a laser-engraved circular pattern of maple leaves pulls the viewer into the design while expressing a surge of pride. From the English version of "O CANADA" come the words "WITH GLOWING HEARTS", which are perpendicular to the French words, "DES PLUS BRILLANTS EXPLOITS". Encircling the design are the full lyrics of the bilingual version of the national anthem, with the text so small, it's almost not visible. The reverse includes a bilingual "50 YEARS ANS" inscription. The obverse features the effigy of Her Majesty Queen Elizabeth II by Susanna Blunt.

Your coin is encapsulated and presented in a Royal Canadian Mint-branded clamshell with a black beauty box. 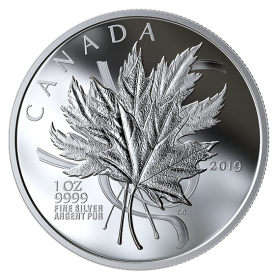