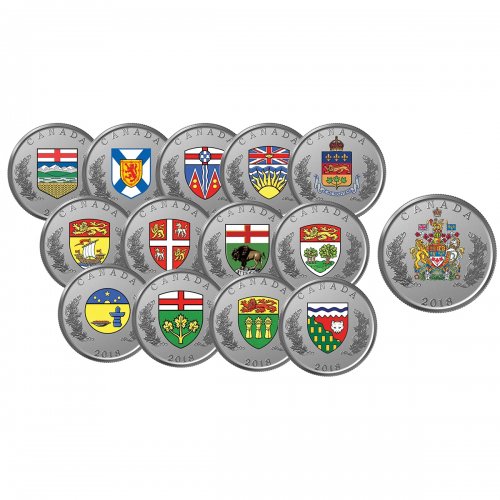 Each provincial or territorial coat of arms is a considered reflection of the land it represents, and when all 13 are viewed together, they speak to the nature of Canada as a whole. Your 14-coin set is a colourful celebration of Canada through some of our most famous heraldic emblems. Each province and territory is emblematically represented on a 25-cent coin, where an engraved maple flourish frames the colourized arms. And this showcase of Canadian heraldry wouldn’t be complete without our national armorial bearings, the Arms of Canada, which occupy a place of honour on the larger-sized $5 coin.

A 14-part celebration of Canada through its heraldic emblems! Order your 14-coin set today!

Special features:
CANADA THROUGH ITS HERALDRY! Celebrate Canada with this captivating journey through our provincial, territorial and national armorial bearings!
14 COINS IN ALL! Your coin set includes:

COLOURFUL REVERSE! Each emblem is resplendent in colours that have just as much meaning as the symbols or charges that appear on the shield.
AN ENGRAVED FLOURISH! A unifying design element, the finely engraved flourish on each reverse is inspired by the quintessential Canadian symbol: the maple leaf.
A PRIDE-STIRRING ADDITION TO ANY COLLECTION! These 14 coins are only available as part of this complete set—a collection within your collection!
INCLUDES SERIALIZED CERTIFICATE: The Royal Canadian Mint certifies all of its collector coin sets.
PURE SILVER: Each coin is crafted from 99.99% pure silver!
LOW WORLDWIDE MINTAGE: Your coin set is limited to a mintage of just 4,000 worldwide.
GST/HST EXEMPT: Your 14-coin set is GST/HST exempt.

Alberta
A blue sky is visible above the snow-capped Rocky Mountains, green foothills, prairies and a wheat field, all topped by the red St. George’s cross on a white background.

Manitoba
Against a green background, the bison represents the First Nations while the red cross of St. George on white alludes to the province’s fur trading past.

New Brunswick
Sailing on blue and white waves, the ship represents the province’s shipping industry and maritime heritage, while the lion is derived from the Royal Arms of England.

Newfoundland and Labrador
The crowned lions and unicorns are derived from the Royal Arms of England and Scotland, while the red and white colours are reversed from the flag of St. George.

Northwest Territories
An Arctic fox and gold bars symbolize natural and economic resources against the red that signifies the tundra, and the green of the forests. The jagged upper portion symbolizes ice and snow (white) and includes a wavy blue line to represent lakes and waterways.

Nova Scotia
Symbolizing the province’s history as a Scottish colony, the Royal Arms of Scotland are centred on the national flag of Scotland, but with reversed colours.

Nunavut
Blue and gold symbolize land, sea and sky. An Inukshuk is paired with the qulliq, a stone lamp that represents the warmth of community and family. While five gold circles represent the sun’s life-giving properties, the North Star (Niqirtsuituq) is a traditional navigational guide that symbolizes the leadership of elders.

Ontario
An emblem that dates back to the 19th century, the maple leaves represent Canada while the cross of St. George is a heraldic symbol of England.

Quebec
The coat of arms features three gold fleurs-de-lis on a blue field as a reminder of Royal France, a gold lion passant to represent the British Crown, and a sprig of green maple leaves for Canada. The arms are surmounted by the Royal Crown and accompanied by the motto “JE ME SOUVIENS”.

Saskatchewan
The red lion rampant is a royal symbol, while the wheat sheaves are a symbol of the province’s agricultural industry.

Yukon
The gold circles and red peaks represent the Klondike gold rush and Yukon’s mineral resources. The wavy stripe symbolizes the Yukon River, while the cross of St. George in the upper portion bears a roundel that alludes to the fur trade.

Arms of Canada
The shield features the three royal lions of England, the royal lion of Scotland, the royal fleurs-de-lis of France and the royal Irish harp of Tara, while a sprig of three maple leaves represents Canadians of all origins. The lion of England holds up the Royal Union Flag, while the unicorn of Scotland carries the flag of Royal France. The arms include the floral emblems of four founding nations: the English rose; the Scottish thistle; the French fleur-de-lis; and the Irish shamrock. The Royal Crown symbolizes the monarchy of Canada, while the motto “A MARI USQUE AD MARE” (“From Sea to Sea”) is inscribed on a scroll. 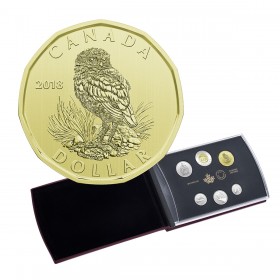 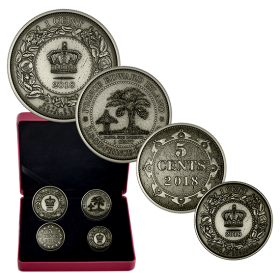 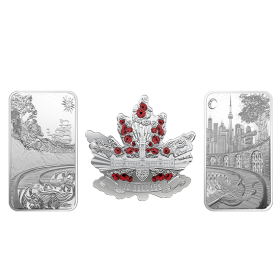 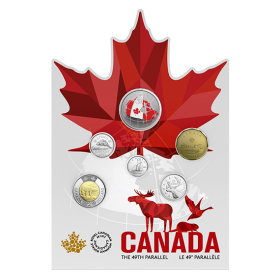