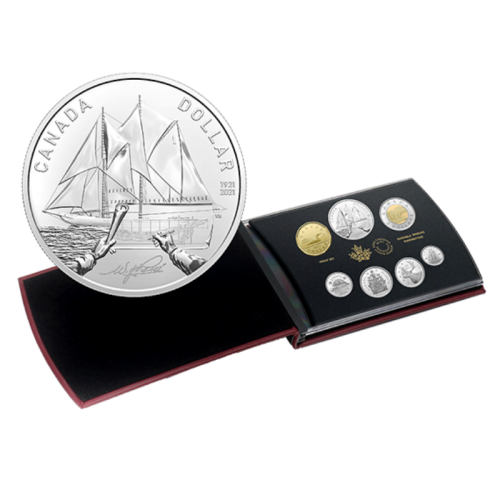 This year's seven-piece Special Edition Silver Dollar set features a brilliant uncirculated version of the 2021 Bluenose Proof Dollar, and it's only available as part of the set. A traditional BU (brilliant uncirculated) finish is a classical approach to the legendary schooner and the effigy of King George V. This effigy appeared on all Canadian coins issued in 1921, the year Bluenose was launched and captured the International Fishermen's Trophy.

Bluenose centennial anniversary extends to the set's 10-cent coin, which is double dated and features the effigy of King George VI—just like the first Bluenose dime issued in 1937. Order today!

PART OF THE BLUENOSE ANNIVERSARY COLLECTION: The 2021 Special Edition Silver Dollar Set is part of a year-long celebration of the 100th anniversary of Bluenose.
A TRADITIONAL, CLASSICAL FINISH: The featured star, the BU dollar, is struck in 99.99% pure silver with a classic, brilliant uncirculated finish. The coin is exclusive to this set and is not available on its own.
TWO BLUENOSE COINS IN ONE SET: The 100th anniversary of Bluenose is also celebrated on the double-dated 10-cent coin.
THREE DIFFERENT EFFIGIES: Three of the seven coins in this set feature obverse designs from the past. The BU dollar features the effigy of King George V from 1921, the year Bluenose was launched, while the 10-cent coin features the effigy of King George VI from 1937.
EVERY DENOMINATION IN CIRCULATION IS REPRESENTED IN THIS SET: Including the unique, double-dated 10-cent piece.
READY FOR REPEAT VIEWINGS: Your set's book-style packaging allows you to showcase these coins with pride.
INCLUDES SERIALIZED CERTIFICATE: The Royal Canadian Mint certifies all of its collector coins.
LIMITED MINTAGE: Only 30,000 sets are available worldwide.

Designed by Canadian marine artist Yves Bérubé, your BU dollar's reverse travels back in time to see naval architect William James Roué (1879-1970) completing his design for the legendary Bluenose schooner. The first-person perspective is flat frosted to distinguish between Roué's vision and the inspiring sight of a traditional, brilliant uncirculated Bluenose under full sail. As an added tribute, W.J. Roué’s signature is included, as it appeared on the original Bluenose sail plan. The obverse features the effigy of King George V by Sir E. B. MacKennal.

Your set's book-style packaging is made of genuine leather and allows you to showcase these coins with pride. 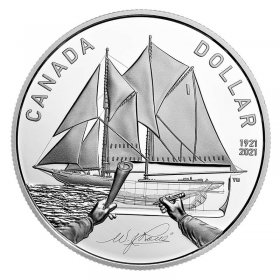 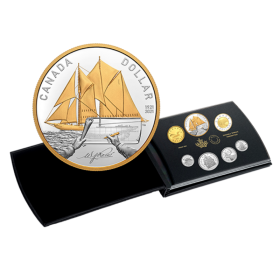