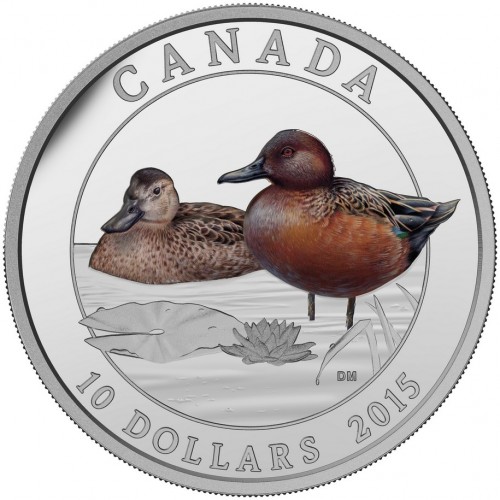 The diminutive cinnamon teal (Anas cyanoptera) is a dabbling that lives in southwestern Canada, the western United States, and across western South America. It is unique for having two separate North American and South American populations. It also generally avoids breeding in the mid-continental prairie region—an otherwise popular breeding ground for dabbling ducks.

Approximately 40 centimetres long and weighing about 400 grams, the male has a cinnamon-coloured head and body with light blue patches on its upper wings. The trailing edge of their wings is iridescent green. It also has bright red eyes. The females are brownish grey with red undertones and have a dark bill and dark eyes. Like the males, the females have patches of light blue on their upper wings. Immature males bear the same colouring as females, but have red eyes.

In western Canada, cinnamon teals summer in wetlands, including marshes, ponds, and small lakes. Generally choosing a new mate each season, they nest near water in small grass-lined depressions that are well camouflaged by layers of vegetation. The female works her way through this protective camouflage to get to her nest. Here, she will lay a clutch of up to 16 ivory-coloured eggs. At the end of the season, the ducks migrate to Mexico, California, and Arizona.

Your coin is the perfect gift for a friend or family who enjoys birds or nature. Order your coin today!

Special features:
Fifth coin in the Royal Canadian Mint's highly popular Ducks of Canada series; this coin is sure to be highly sought after by bird watchers, duck hunters and coloured coin admirers.
Celebrate the beauty of Canada's waterfowl with a male and female cinnamon teal in their natural habitat on a beautifully coloured and engraved 99.99% pure silver coin.
Your coin is GST/HST exempt.

Design:
The reverse design by Canadian artist Denis Mayer Jr. features a coloured male and female cinnamon teal in their natural habitat. In the foreground on the right side of the image, the stunning crimson male with his striking red eye and characteristic patch of light blue on his wing-front wades in a pond near a swimming female. The female, with gray-brown colouring and dark eye stripe, bobs gently in the water just behind the male on the left side of the composition. A lovely white water lily and bright green lily pad float in the foreground. The entire image is reflected in the rippling water. 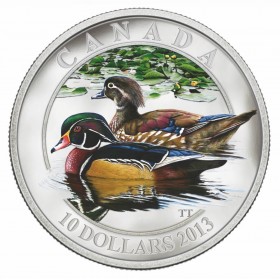 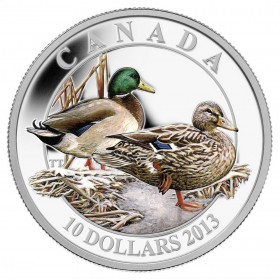 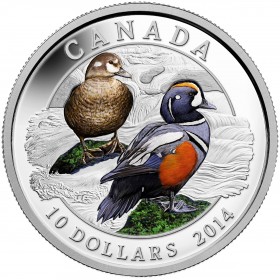 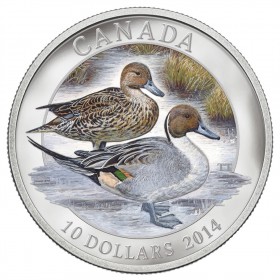 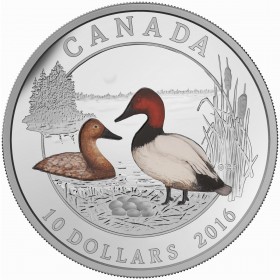