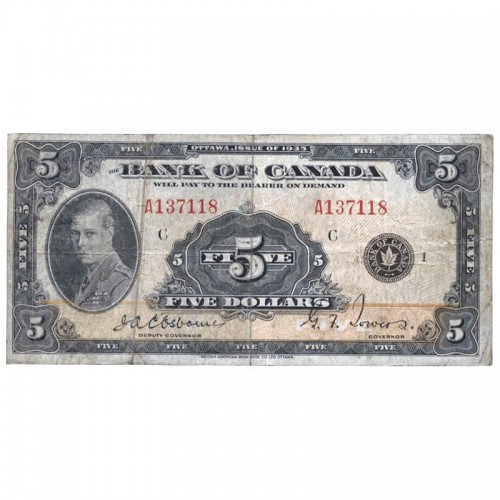 The Bank of Canada was founded in 1934 and given responsibility, through an Act of Parliament, to regulate the country's money supply and to "promote the economic and financial welfare of Canada." Accordingly, it was also given the exclusive right to issue bank notes. On 11 March 1935, the Bank of Canada issued its first series.

The notes were unilingual, and matching versions of all denominations were available in either French or English. Also unique to the series were a $25 and a $500 note. The series featured portraits of various royals and former Canadian prime ministers. On the backs of the notes were allegorical figures symbolizing Canada's growing agricultural, industrial, and commercial prosperity.

The front of the $5 note features a portrait of Edward, Prince of Wales, the first son of King George V and Queen Mary. He inherited the throne upon his father’s death in 1936 and abdicated that same year in favour of his younger brother, the Duke of York, who became King George VI. Edward is shown wearing the khaki uniform of a colonel. The portrait was based on a photograph credited to the famous British photographer, Vandyke, and owned by the Canadian Department of External Affairs.

British American Bank Note Company designed and printed the note, and its master engraver, Harry P. Dawson, engraved the portrait. Dawson also engraved the allegorical figure representing electric power that appears on the back of the note.

1935 Bank of Canada $5 Prince of Wales English Series A Bill Note comes in a protective clear holder in titled condition. 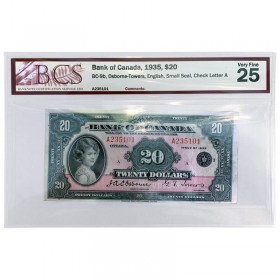 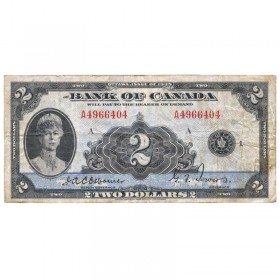