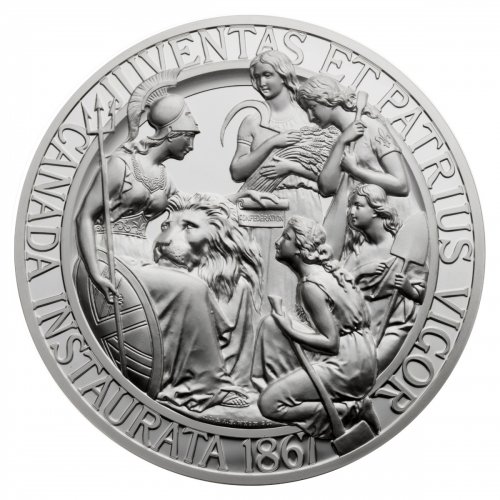 On July 1, 1927, the Dominion of Canada marked 60 years of progress under the banner of Confederation. Festivities across the country offered proof of a strengthening sense of national pride and identity—a spirit beautifully preserved in a table medal from the by-gone era: the Diamond Jubilee of the Confederation of Canada Medal.

Re-created here on the coin's reverse, the medal's Art Deco-inspired design makes it a stunning part of Canada's medallic history. On the 150th anniversary of Confederation, we pay tribute to a tradition of celebration with a tribute to this artefact from another historic year—the year of Canada's Diamond Jubilee!

Special features:
FIRST COIN IN NEW SERIES! Your 10 oz. pure silver coin is the first in a series of three important historical pieces commemorating Canadian Confederation. Each medal features a landmark along the path of Canadian history:

A TRULY DESIRABLE PIECE OF MEDALLIC CANADIAN HISTORY! The 1867 Confederation Medal became one of the rare early symbols of the Dominion of Canada. Prestigious and sought-after since it was issued, it has been coveted by collectors as a truly desirable piece of medallic Canadian history!
PAST AND PRESENT SHINE TOGETHER! This stunning piece combines the greatest artistry at the time of Confederation with our world-class modern craftsmanship.
A FAITHFUL TRIBUTE! We scoured our archives for the original dies, ensuring that every detail and nuance of the original 1867 design has been faithfully incorporated into this landmark 150th anniversary adaptation. As well, your coin was struck with the same impressive 76 mm diameter and bold high relief design as the original 1867 version!
A SPECIAL OBVERSE! This double-effigy obverse commemorates Her Majesty Queen Elizabeth II, our current sovereign, and Her Majesty Queen Victoria, the sovereign at the time of Confederation. Also, look for their Royal Cyphers!
DOUBLE-DATED YEARS! Your coin also features the double-dated years of "1867-2017", the word "CANADA" and the face value "100 DOLLARS"!
INCLUDES CANADA 150 BRANDING! The official CANADA 150 branding on your packaging is a reminder of Canada's special year!
INCLUDES SERIALIZED CERTIFICATE! The Royal Canadian Mint certifies all of its collector coins. Most of these are serialized certifications, meaning that each certificate is given a unique number, starting at 1.
OWN A RARE PIECE OF CANADIAN HISTORY! Only 1,000 coins will be made available worldwide. Hurry and order yours today before they are all gone!
10-OUNCE 99.99% PURE SILVER COIN! Your coin is GST/HST exempt!

Design:
Your coin is a faithful tribute to the table medal's original design by world-renowned engravers J.S. and A.B. Wyon of London, England. Inspired by the rich medallic traditions of the 16th century, the design features allegorical representations of Great Britain and the fledgling Dominion of Canada.

Britannia, Great Britain's timeless allegory, is peacefully seated and is adorned with a helmet and armour. She holds a trident on her right as a shield ornamented with the Royal Union Flag rests on her side. A lion, the stalwart symbol of Great Britain, is seated at Britannia's feet and is resting its head on her knees. Britannia is presenting a figurative representation of the British North American Act that reads CONFEDERATION.

The CONFEDERATION scroll is being bestowed upon four young maidens, who gaze cherishingly upon the matronly Britannia. The maidens represent the four original provinces in the British North America Act (clockwise from the top): Ontario with a sickle and sheaf symbolizing agriculture; Quebec holding a canoe paddle that represented commerce of the era; Nova Scotia with a shovel representing its rich mining; and New Brunswick with an axe, a representation of forestry.

The design also features the Latin adage JUVENTAS ET PATRIUS VIGOR, or YOUTH AND PATRIOTIC STRENGTH, as was presented on the original design in 1867. The reverse also features the double-dated years of "1867-2017", the word "CANADA" and the face value "100 DOLLARS"

While the obverse of the original 1867 medal featured the single effigy of Queen Victoria, the reigning monarch at the time of Confederation, the obverse of this new coin features the dual effigies of Her Majesty Queen Elizabeth II by Susanna Blunt and Queen Victoria by Leonard Charles Wyon. The obverse also includes the cypher used by Her Majesty Queen Elizabeth II, and the cypher that was used by Queen Victoria. Each cypher is ensigned with a crown depicted in a style specifically used by each monarch.

Packaging:
Your coin is encapsulated and presented in a Royal Canadian Mint-branded maroon clamshell with a Canada 150 beauty box. 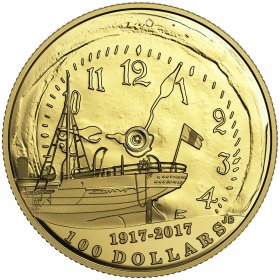 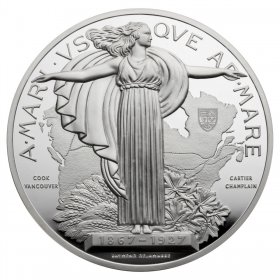 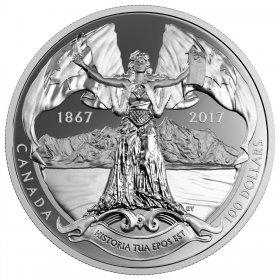